Ceiling fans work by displacing the hot air to allow cooler air to reach you, creating what’s known as a “wind chill”. This is possible because the hot air always rises, and it’s thus sucked into the rotating fan’s blades, from where it’s then pushed down as a breeze.

This helps create that cooling effect, but also note that fans can be set to create a warmer environment during winter as we will see below in this article.

Fun/fan fact: Ceiling fans and fans in general do not cool the air. Factually, they warm the air slightly as a result of the warming of the motors.

What makes it seem like fans are cooling the air is because they create a breeze that helps speed up sweat evaporation from your skin, making you feel cooler.

This explains why ceiling fans feel ineffective in highly humid air or when the air is near your body temperature.

Again, this is  why you’re advised against leaving your ceiling fan running when you are not in the room since the fan is designed to work directly on your body.

It does not change the air’s temperature, which will result in a waste of electricity if no one is in.

Parts of a ceiling fan:

How does a ceiling fan work? How the various parts of a fan work?

Second, the ceiling fans also have a capacitor, whose work is to torque its electric motor up to allow it to start up and run.

Once it’s running, an electric current will reach the ceiling motor then proceed into the wire coils that are wrapped around the fan’s metal base, creating a magnetic field.

This magnetic field will then expend force in a clockwise/counter-clockwise motion depending on the selected setting, and in the process change the electric energy into mechanical energy.

As a result, the motor coils will then begin spinning, and this will cause the fan to capture the spinning motion and transfer it to the blades.

Once the blades start moving, you will now begin experiencing what we explained in the “fun fact” above, that “cooling effect” as the sweat begins to evaporate from your skin.

How can you use a ceiling fan to warm a room?

As we mentioned above, naturally, warm air rises up, and the actual running of the fan’s blades speeds up this warm air and cool air circulation to create the “cooling effect”.

However, ceiling fans can also help create a downdraft, which is basically reversing the natural direction of air movement. So, simply put, with a ceiling fan, you can push the hot air back down, instead of it raising up as it should naturally do.

As a result, the cool air will rush and fill up the vacuum created after the hot air is pushed down. And, by continually doing so, the warm air will eventually take up most of the ground space, and this will keep the room warmer.

Remember, as we mentioned above, once the warm air is picked up by the fan’s blades it will come back down as a breeze.

But, when working in reverse, the warm air is not sucked up, rather, it’s pushed back down, and that’s how the room remains warmer.

Most people have been using ceiling fans for years, but very few know that you can actually use the fan to warm up the room.

This is because most assume that fans are only meant to be used in summer, thus ignoring a setting that’s meant to reverse the blades rotating direction, counter-clockwise to clockwise.

As a matter of fact, most ceiling fans are designed for use in both summer and winter, and changing the direction of the blades to suit the current season is easy.

In summer, your ceiling fan should be set to rotate counterclockwise. This way, it will help push the cool air down, which will in return enable a quicker sweat evaporation from your skin, thus creating the “wind chill” effect.

This way, everyone in the room will feel cooler, and you won’t be affecting the room temperature, which in return will allow you to set your thermostat at a higher temperature as needed without affecting your overall comfort.

How to tell if the ceiling fan is set to rotate counterclockwise for summer?

Start by turning the fan on, then stand directly under the blades. Next, look up to see how they are rotating.

During summer, the blades should be moving from top left, followed by downright, then back to the top.

Also, you can quickly tell this by standing under the running fan and feeling the air movement. If you can’t feel the air movement, your fan is rotating clockwise, which won’t give the desired results during summer.

This should obviously be the opposite of summer. So, during winter, you should set your ceiling fans to rotate clockwise.

Important Note: If your fan is designed for use in both summer and winter, you will be able to lower your thermostat’s temperature and also reduce the use of other heating devices, which in return will help cut the overall heating bills.

Basically, as explained above, when set to rotate clockwise, the ceiling fan will pull the cool air up, and the warmer air will be forced to move back down, thus creating a warmer environment.

How to tell if your ceiling fan is set to rotate clockwise for winter?

Again, start by turning on the fan. Stand directly under its blades then look up to see how they are rotating.

For clockwise direction, the fan’s blades should be moving from top towards the right and down towards left, then back to the top. Basically, just the way a clock’s hand moves.

Important Note: To create a warm effect, your ceiling should not be too far from the ground. Thus, if you mount your fan on a vaulted ceiling or a two-story cathedral, you might just leave it for use only during summer since it will be too high to create an effective wind chill.

Your ceiling fan will either come with a wall control or a remote control. As such, reversing the blades rotation is easy since you will only need to press the right buttons. If you want to learn more about this, check out our latest article to find out more about the key benefits of using a remote for your ceiling fan.

Simply, for counterclockwise, during summer, press the forward button and for clockwise blade rotation in winter, press the reverse button.

And, while doing this, remember to adjust your thermostat accordingly as it will help you save both energy and money.

However, there are some ceiling fans that do not come with neither a remote nor a wall control. In this case, they will have a toggle-switch somewhere on the motor housing, which is below the blades. To change the blade direction in these cases, all you need to do is flip the switch.

If yours has a vertical switch, just flip it down to set it for summer to get a downward airflow. If you want to change to the upward airflow for winter, just flip the switch back up.

Does speed affect how a ceiling fan works?

Ceiling fan speed is the other item that you should understand when learning how a ceiling fan works.

Thus, when running your fan, go for the lowest speed, as long as it’s making you comfortable.

Getting to understand the basics of how a ceiling fan works will help you use it effectively and get the most out of it.

As mentioned above, you can effectively use a ceiling fan in both summer and winter, and this will help you save on both your money and energy.

Again, it’s good to understand your needs before purchasing a ceiling fan. If you want effective airflow, then go for big ceiling fans with big blades. However, if you just want a cute fan, there are many smaller options that you can go for. Basically, with ceiling fans, bigger is better. We personally love the Big Ass Fans Haiku L Smart Ceiling Fan, 52″, Black

Check our latest article on how to choose a ceiling fan to make an informed purchase decision.

We hope that we have answered the question “how does a ceiling fan work” and that our tips on how to effectively use your ceiling fan, in both summer and winter, will help make a difference.

Do let us know if you’ve learned anything new from our article and also feel free to mention anything that you feel is worth adding. Thank you! 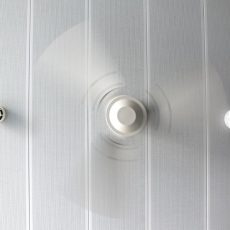 How do Ceiling Fans Cool a Room?

5 Key Benefits Of Using A Remote For Your Ceiling Fan